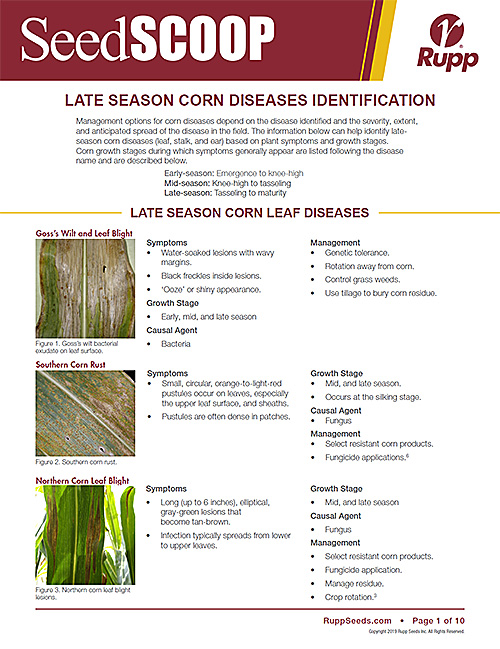 Management options for corn diseases depend on the disease identified and the severity, extent,
and anticipated spread of the disease in the field. The information in this issue can help identify late-season corn diseases (leaf, stalk, and ear) based on plant symptoms and growth stages. Corn growth stages during which symptoms generally appear are listed following the disease
name and are described below.
Early-season: Emergence to knee-high
Mid-season: Knee-high to tasseling
Late-season: Tasseling to maturity

Stalk diseases or rots become apparent as plants reach maturity and tend to be caused by a complex of several disease-causing fungi and sometimes bacteria. Plants with rotted stalks almost always have rotted roots too, usually caused by the same organism. Visual identification is sometimes difficult. Wilting is typically the first sign of stalk rot. In a few days, leaves turn a “frosted” gray, ears droop, and the outer rind of the lower stalk turns brown. Deteriorated stalk pith tissues usually can be determined from pinch and push tests. Fields where stalk rot is developing should be harvested early to reduce grain losses.

Ear disease rots can affect ears, kernels, or cobs and reduce test weight and grain quality. Some fungi produce mycotoxins which may contaminate grains. Rotting observed in the field is often due to a complex of causal organisms, not just one. Ear rots can be favored by late-season humidity. Infections are increased by ear damage from birds or insects and by stalk lodging that allows ears to come into contact with the soil.

Read more to learn how to identify the diseases, the growth stage(s) they occur in, and how to manage them in this issue of SeedScoop